“The therapeutic potential of music is multifaceted and profound.  It legitimately belongs in the domain of occupational therapy because it can promote health through the use of activity that involves all of the occupational performance components” (MacRae, 1992)

In my groups I am always using my unique occupational therapy skills: assessing for clients strengths and difficulties with harp playing and carrying out activity analysis on all the components of the harp playing process.  I make adaptions for people that demonstrate difficulty with certain tasks. For example bilateral hand use; maintaining focussed attention; difficulty with fine motor skills; or visual or auditory impairment.

In her debate and discussion piece MacRae (1992) states that “music is not only a legitimate healing tool, but also an appropriate expression of the philosophy of occupational therapy.  Music is a vocational activity for some and an active or passive leisure pursuit for others.  It is a pleasurable, intrinsically motivational activity that can be easily graded and used to promote overall health through relaxation and movement. Music is both versatile and powerful in that it has the potential to involve all of the components of occupational performance – motor, sensory, cognitive, social and emotional”.

Music is a meaningful occupation that is shared by individuals of all backgrounds and cultures throughout the lifespan, it is an activity by which occupation can be both a means and an end – the process and the outcome (Kirchen et al, 2018).  For example fine and gross motor skills can be improved through harp playing.  Music is easily accessible, and can be a valued life occupation for people with or without disabilities (Cohn et al, 2017).

From: Tuning in to Meaningful Occupation, p20.

In the 1995 Eleanor Clark Slagle Lecture, Catherine Trombly described occupation as a means and an end. She states that occupation is both a treatment end goal and a means to remediate occupational performance challenges. Trombly emphasised that the occupational therapist must ensure that the therapeutic approach is skilled by facilitating the just right challenge for the client. In turn, the client must possess the motivation to engage in the therapeutic process, which is heavily dependent on the treatment session reflecting a client-centered, purposeful, and meaningful approach (Kirchen et al, 2018).

“Occupational therapists can engage clients through the use of music based activities in order to promote health, prevent disease and disability, of as a therapuetic medium for people with disabilities” (Cohn et al, 2017).

Cohn et al, 2017 states that various studies have shown that music can improve wellness through an enhanced sense of self, creativity, control, sense of belonging, wellbeing and relaxation, and increased verbal and non-verbal communication. Research also suggests that the therapeutic use of music within occupational therapy can also combat stress related disease, decrease the risk of dementia and improve overall wellbeing.

Paul and Ramsey (2000) suggested that using music as an ancillary occupation in physical rehabilitation can help move the rehabilitation process forward. Music could strengthen emotional wellness and has also demonstrated a link to positive physical health promotion through propagation of mood enhancing characteristics, such as focus, and encouragement of movement.  This video demonstrates how the rhythm of music helps a client with Parkinsons mobilise, watch to the end when he leaves his zimmerframe behind!

Craig (2008) discusses the use of music applications that are organized around enhancement of occupational performance, utilizing three distinct methods:

(2) Music as occupation: The individual uses a music activity as a new occupation, directly enhancing participation in life and quality of life by providing the benefits of engagement in meaningful occupation. The inclusion or addition of any of the previously mentioned music activities as a new occupation would undoubtedly involve the assignment of meaning and value to the music activity, as is consistent with the definition of occupation.  A music program designed for individuals recovering from a spinal cord injury found benefits not only in hand grasp and coordination, but also motivation and psychosocial factors such as self-esteem. 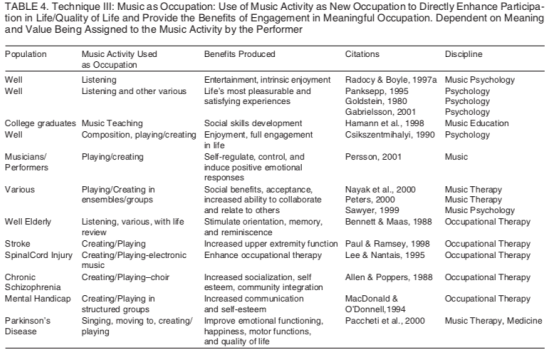 Craig (2008) formed a list of the possible areas that music may affect, referring to studies from other fields have indicated music has made a significant difference:

“As illustrated here and noted by MacRae (1992), music activities have the potential to involve many if not all of the client factors and performance skills crucial to performance of occupation. Therefore, the universal appeal of music might address the client’s social, emotional, and motivational needs, while its versatility allows for facilitation of occupational performance in multiple dimensions” (Craig 2008 p89)

Eidevall and Leufstadius (2013) examined a young group of musicians with physical disabilities to identify the perceived meaning of music as a primary occupation, and they identified five themes which emerged from their study which identified music as providing an important role in past, present, and future experiences. Music plays a role in allowing for individual growth, change for the future, relaxation, expression of thoughts and emotions in the present, and provides a link to past memories and experiences. Additionally, engagement for the young adults in music as a social occupation increased the self-reported confidence of group participants and helped the group bond strengthen.

In joint music and occupational therapy sessions with an adult called Fran, with a traumatic brain injury, a music therapist and occupational therapist worked together over a six week period delivering interactive sessions of up to 45 minutes depending on how much the client could tolerate.  Fran was able to choose musical instruments, and sessions used story telling, sensory objects and music.  The approach provided a useful framework to explore Fran’s physical, cognitive and behavioural goals (Turner and Tyas, 2012).

“Music used in conjunction with other activities in the field of occupational therapy can be successfully used as an element supporting attention. Not only does it relax, it also helps with the rhythm of  activities performed, and thus improves the rehabilitation process” Radzińska, M. et al (2018)